University of Jordan Innovation and Entrepreneurship Center announced the incubation of 8 new student entrepreneurial projects from the University of Jordan, to have financial, guiding, and technical support to help them launch, grow and transform into productive projects.

Ibrahim Al Mubaidin- University of Jordan Innovation and Entrepreneurship Center (UJIEC) announced the incubation of 8 new student entrepreneurial projects from the University of Jordan, to have financial, guiding, and technical support to help them launch, grow and transform into productive projects.

The selection of these eight projects came within the framework of the second season of the “ إبدا  - Start” incubation program, which is supervised by UJIEC.
The projects were selected according to unified criteria by a specialized and impartial jury of sixteen university entrepreneurial projects that reached the final stage within the framework of the “Start” incubation program, which was launched last year.
According to the results of the selection, the pioneering project (آني) led by Eng. Hamza Al-Daoud came in the first place and received financial support worth (four thousand dinars).
And “آني” is the first Jordanian brand interested in designing easy-to-wear clothes to serve people with disabilities and the elderly. These clothes are distinguished by the fact that they are worn without the need to move the affected area and serve large groups from cases of simple fractures to people with disabilities and movement difficulties.

And the “Virtual Clinic Project” came in second place, led by students Abdullah Hamdan and Taha Al-Nabrisi from the College of Medicine, and the project received financial support worth (three thousand dinars).
And the virtual clinic project is based on building an educational platform that aims to reduce medical errors and raise the level of health care by providing a series of simulations of some medical procedures and operations and training doctors on virtual patients (based on data that happened in reality) until it reaches a Final diagnosis and treatment.
As for the third place, the "Preventive Caller" project came with a team consisting of Omar Al-Jaghbir and Muhammad Al-Refai from the Faculty of Science and Hamza Hussein from the Faculty of Medicine and received financial support worth (two thousand dinars).
The project aims to design devices that prevent and detect armed robberies in Jordanian banks, so that the devices rely mainly on artificial intelligence techniques, as they analyze the footage taken in the bank by the same device and work to search for weapons used in the robbery regardless of its kind.
As for the fourth to eighth positions, they were awarded to five distinguished pioneering projects, and each project received financial support of one thousand Jordanian dinars, which are:
The Smart Water Management System project led by Bayan Al-Abdallat and Wasan Mohammed from the College of Business it is an intelligent water management system that uses compact and accurate algorithms with perfect smart sensors near the pipes connected with a mobile application that allows the user to follow water consumption in real-time and detect water leaks and location within the facility or house that will reduce the cost of the water bill, and avoid damage. Next is the project "Where Bus" led by the student Osama Murad from the College of Business and his team, it is a solution that changes the concept of school transportation and transfers it to a new generation using an application that connects and tracks school buses through satellites so that parents and students can track the movement of buses continuously through the application.

Then came the Nilsa - نيلسا project, managed by student Rahaf Zorba from the College of Engineering, which aims to solve the problems resulting from drought in farms and reduce the large quantities of water used for irrigation through a software system that contains a huge database and a set of approved scientific equations that calculate the exact amount of water needed by the plant, for the system to start the irrigation process automatically, saving 50% of the water used on the farm, and reducing seasonal losses.

Next is خيط-Khayt project led by the student Ibrahim Kullab from the College of Engineering, which is a startup that works on the 13th goal of the sustainable development goals (climate change) by producing environmentally friendly fruit bags, recycled bags, and environmentally friendly cloth bags to be used as an alternative to plastic bags with unique designs Embroidery and printing on it.

Finally, the project "Space off" Led by the student Muhammad Melhem from the College of Engineering, it is a pioneering project aimed at educating the Jordanian community of the school and university students in the field of space applications with the aim of integrating them to compete in global markets in this field. 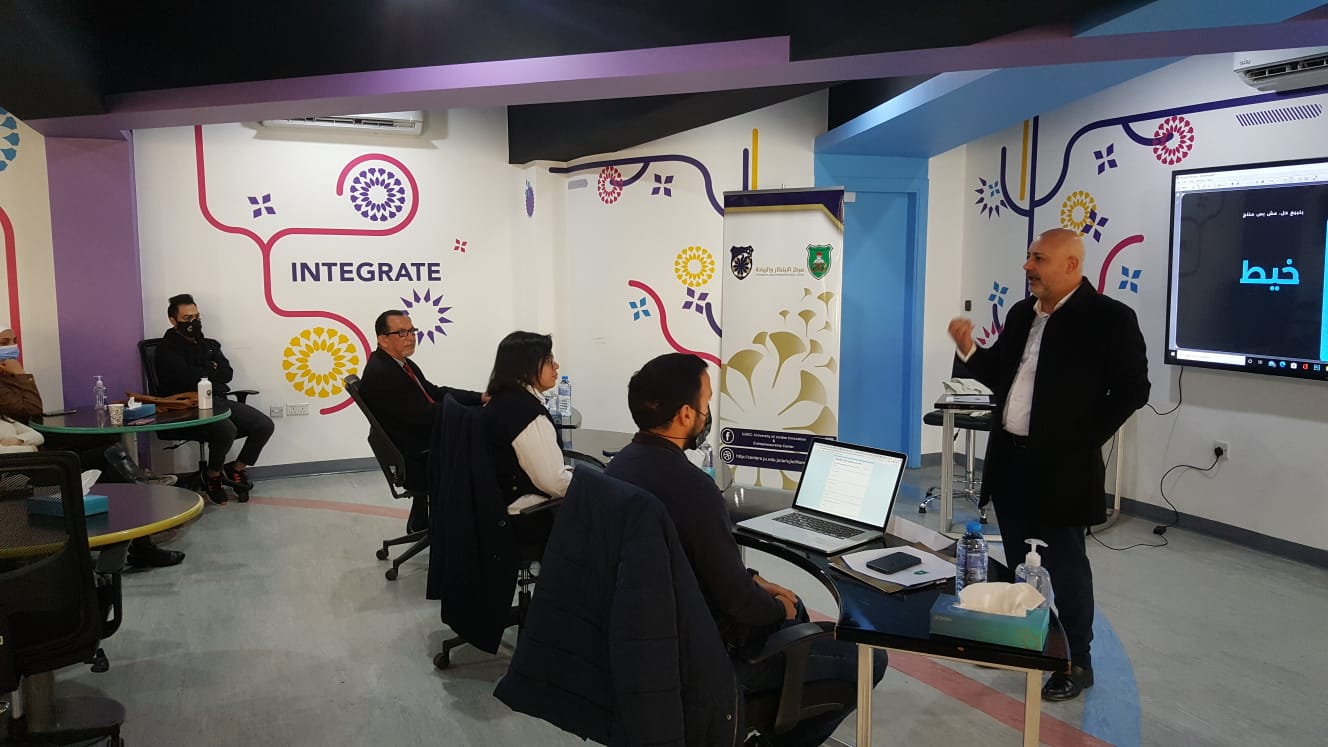